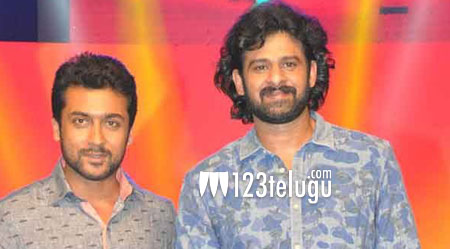 Tamil star Suriya and Young Rebel Star Prabhas share a good rapport between each other. During the shooting of Baahubali, Suriya visited the sets and Prabhas took him home for a sumptuous lunch.

In his latest interview on the occasion of Tamil new year, Suriya expressed his wish to invite Prabhas for lunch at his Chennai residence. Suriya then proposed a funny deal to Prabhas.

Suriya said that he will request his S3 director Hari to create a special cameo for Prabhas and that Prabhas in turn should get him a small scene in Baahubali 2. Indeed an amusing camaraderie between two of the biggest stars down south.