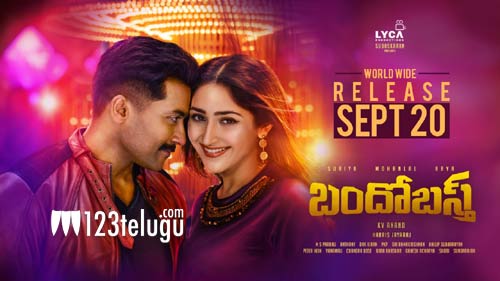 Until recently, two highly-anticipated action thrillers, Suriya’s Kaappaan (Bandobast in Telugu) and Prabhas’ Saaho, were schedule to lock horns with each other on August 30. Naturally, fans of both the stars and trade circles were anxiously awaiting the big box-office clash.

But a couple of days ago, there were speculations that Kaappaan may be postponed to September 20. Confirming the buzz, Kaappaan’s team today announced that the film is indeed pushed to Sep 20. This move will ensure a free, solo release for both the movies.

Kaappaan, like Saaho, will be simultaneously releasing in Tamil and Telugu. Suriya plays an NSG Commando in the movie. Mohanlal essays a key role. The film also has young couple Arya and Sayyeshaa. KV Anand has directed the movie and Lyca Productions bankrolled it.
Attachments area