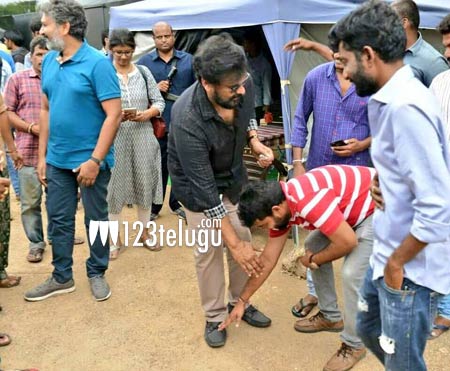 It is a known fact that the shooting of Ram Charan’s new film, Rangasthalam is going on in the outskirts of Hyderabad. A stunning set of a village backdrop has been put up for the same and the shoot is going on a quick pace.

Meanwhile today, the unit was up for a pleasant surprise as star hero Chiranjeevi and Rajamouli visited the sets and watched the proceedings quite closely. Sukumar is directing this film which is based in the 80’s and Ram Charan will be seen as a total villager.

Samantha is cast as the female lead in this film which is being produced by Mytri Movie Makers. DSP scores music.