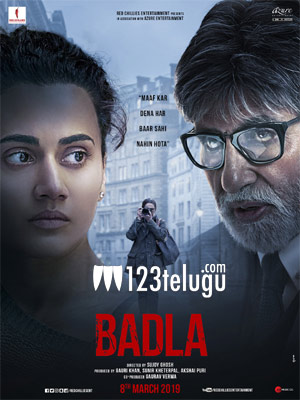 Taapsee has struck gold yet again, going by the reviews pouring in for her latest film Badla. The actress played the role of a businesswoman, who wants to know how her lover was killed, and what happens when she hires a lawyer. Amitabh Bachchan played the role of the lawyer, and the film was directed by Sujoy Ghosh.

The film, which is an official remake of a Spanish thriller, The Invisible Guest, was praised for its edge of the seat moments, and performances of the two lead actors – Taapsee and Amitabh Bachchan – who came together once again after Pink. Interestingly, Taapsee revealed that the lead character was initially written for a man, but she was so interested in playing it that she convinced Sujoy to let her play that role instead. Going by the reviews so far, it looks like her conviction has paid off quite well.

Meanwhile, the film earned Rs 5.94 crores in India on the first day of its release, and it is expected to gross more over the weekend, thanks to positive word of mouth. Interestingly, Badla opened to better numbers compared to Pink, and trade analysts are confident that the film will turn out to be a hit at the box office.