Tamannaah, Kajal’s friendly banter during a photoshoot
Published on May 11, 2019 1:00 pm IST 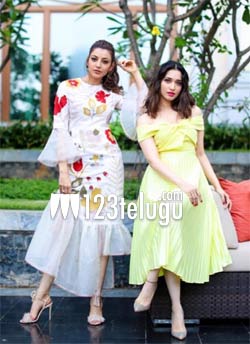 That star heroines Tamannaah and Kajal Aggarwal are very good friends is a well-known fact. Together, they have made numerous public appearances and enthralled their fans. But their latest banter while taking part in a photoshoot tops them all.

Tamannaah and Kajal were clicked while hugging each other during a photoshoot in Chennai yesterday. Seeing their camaraderie, the photographer lady joked that they can actual make a film titled ‘Girlfriends’. To this, Tamannaah said, “Ye galat sound kar raha hai (This is sounding wrong)”.

Kajal chipped in and said that they can make a film like Vicky Cristiana Barcelona. Tamannaah said that Kajal’s idea is too ‘Hollywood’ and went on to suggest something more local and with mass masala entertainment. After a few seconds of amusing banter, they mutually agreed to make a film titled Sambar-Chutney. Tamannaah posted the video on her Insta account and asked her followers to suggest some good titles for their film.