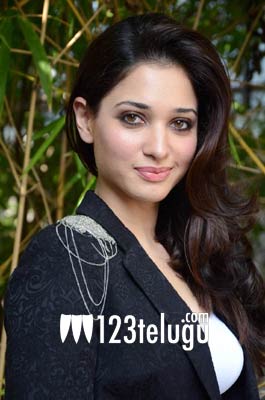 Tamannaah has been away from limelight as far as her career in Telugu is concerned. She was last seen in Tadakha, which went on to become a hit at box-office and she recently signed Mahesh Babu’s upcoming film Aagadu. The latter film is expected to go on floors later this year, but before that she’s busy shooting for her upcoming Hindi project titled It’s Entertainment. Akshay Kumar is playing the lead role and Tamannaah is playing his romantic interest in this action comedy. Tamannaah’s previous big project in Hindi Himmatwala fizzled out at box-office and she desperately needs a big hit to consolidate her position in Hindi. No wonder, she has pinned big hopes on this film. She’s currently in Bangkok to shoot for the film and some important scenes are being canned on Tamannaah, Akshay Kumar, Prakash Raj and Sonu Sood. Sajid-Farhad have written the script and they are also directing it. Ramesh Taurani is producing it.