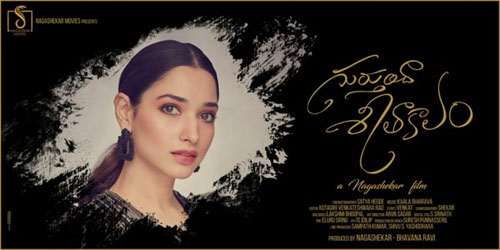 It’s well known that star heroine Tamannaah will be sharing screen space with talented actor Satyadev in a romantic drama. The film is titled Gurthunda Seethakalam and it’s a remake of the Kannada hit, Love Mocktail.

As per the latest updates, Gurthunda Seethakalam will have its formal launch on August 27 at hotel Taj Krishna. The film’s regular shoot will kick-start from the third week of September. The makers recently unveiled Tamannaah’s first look from the film.

Nagasekhar will direct the movie and is also producing it under Nagasekhar Movies banner along with Bhavana Ravi. Stay tuned for further updates.
Attachments area