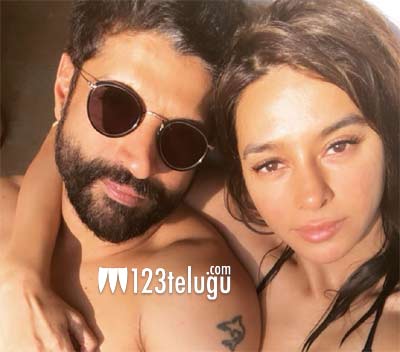 Shibani Dandekar, who will soon be seen alongside Tamannaah in That Is Mahalakshmi, has been dating Farhan Akhtar for quite sometime now. The duo has been spotted at several popular restaurants and clubs in Mumbai, and the actress had even shared pictures from their vacation together.

When asked if the couple is planning to make this relationship official, Shibani said, “I think a picture speaks a thousand words. When I post something, it’s there for the people to see. I don’t think you need to write a caption or say something; it’s there in the picture(s). Whatever is there is what you want to take and make from it… I don’t think we are going out about to hide anything or announce anything. It is what it is.”

That Is Mahalakshmi will also mark Shibani’s debut in Telugu cinema, and she will also be seen in Zam Zam, the Malayalam remake of Queen. She is also a popular TV host and an emcee.

Because he has the coolest tattoo in the world 🐬 and because it’s his bday! Happy birthday my sweet grumps ❤️ love you loads @faroutakhtar 😘 🥂🎂🥳