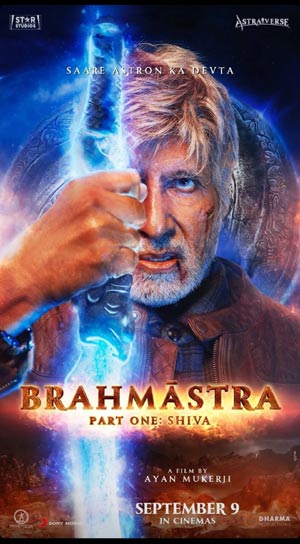 Brahmāstra Part One: Shiva is one of the much-awaited Bollywood movies this year. Directed by Ayan Mukerji, the movie has the star couple Ranbir Kapoor and Alia Bhatt as the lead pair. The film is all set to hit screens on September 9, 2022.

The socio fantasy biggie has the Bollywood Megastar Amitabh Bachchan in a pivotal role. Today, the makers have released the first look of Big B. His character name is Guru, the bearer of the sword of the light, Prabhāstra.

The theatrical trailer of the Bollywood magnum opus will be released on June 15, 2022. Akkineni Nagarjuna, Mouni Roy, and others are also a part of this fantasy adventure. Produced by Star Studios, Dharma Productions, Prime Focus and Starlight Pictures, Brahmāstra has Pritam’s music.

Here comes GURU! The Wise Leader who holds the PRAHBHĀSTRA: The Sword Of Light!