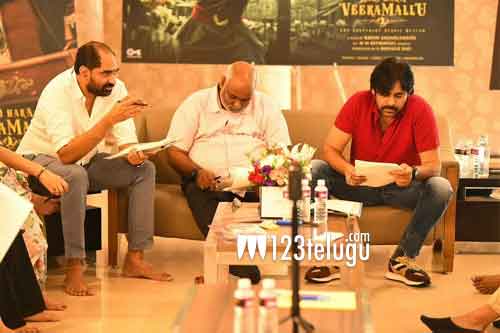 Director Krish is coming up with his biggest ever Magnum Opus with Pawan Kalyan in and as Hari Hara Veera Mallu.

Pawan Kalyan, who till date, did not attempt this level of period action adventure is very keen on delivering a film that will remain in the hearts of Telugu and Indian Film lovers, along with his fans.

The team after a short break from shoot has decided to go for a pre-schedule Workshop with major actors and few important members of the crew who will participate in the upcoming schedule.

Actors like Niddhi Agarwal, Sunil, Subbaraju, Raghu Babu, writer-comedian “Hyper” Aadhi, along with them AM Rathnam, producer A Dayakar Rao, music composer Keeravani & the important crew are participating in this pre-schedule workshop along with Pawan Kalyan.

Regular shooting of the film will start post the workshop, from mid-October. Team conducted Saraswati Pooja as an unit at Mega Surya Productions office and began the schedule formally.