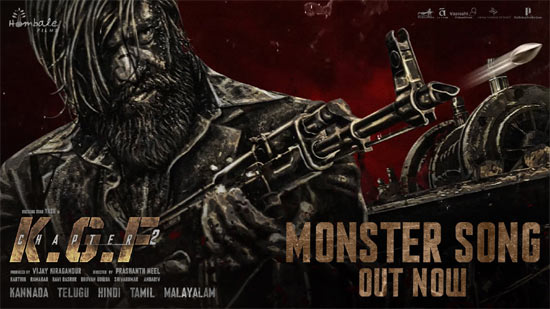 It’s been 10 days since the release of Yash-starrer KGF: Chapter 2. The magnum opus, directed by the talented filmmaker Prashanth Neel is creating history at the box office. Today, the makers have come up with a monstrous update.

Those who already have watched the film fell in love with the rap song that comes during the end titles. Today, the makers have released it up on the request of fans and audiences. Featuring the singer and lyricist Adhiti Sagar, the promotional song has hit dialogues from the movie. The sensational track was composed by Ravi Basrur.

Srinidhi Shetty played the love interest of Yash in this movie. Rao Ramesh, Prakash Raj, Raveena Tandon, Sanjay Dutt and others are also a part of this biggie, produced by Hombale Films on a grand scale.