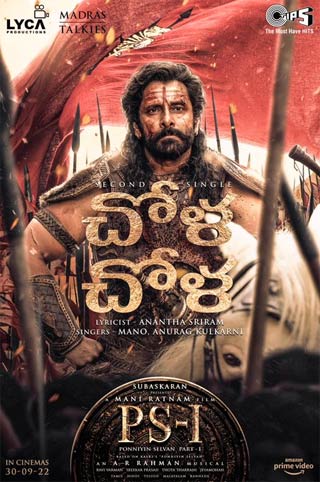 Ponniyin Selvan directed by Mani Ratnam is all set to release in theatres on September 30th. As there isn’t much time left for the release the team amped up the promotions by releasing the teaser and the first single Ponge Nadhi recently.

Now the makers announced that the second single Chola Chola will be coming out on August 19th at 6 PM. A ferocious poster featuring Chiyaan Vikram has been released. The song will have multiple singers across languages. The Telugu version is penned by Anantha Sriram and will have the vocals of Mano and Anurag Kulkarni.

This star-studded two-part film is being made on a mega budget of 500 crores by Madras Talkies and Lyca Productions. It is based on the novel Ponniyin Selvan written by Kalki Krishnamurthy. AR Rahman is providing the tunes. The film will also be releasing in the IMAX format.