Team Vikram Vedha to screen trailer exclusively for fans in 10 cities
Published on Sep 7, 2022 11:00 am IST 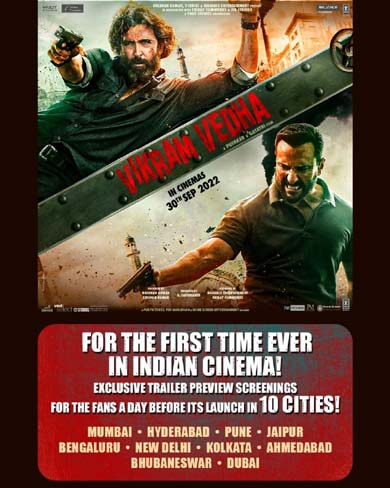 The makers of the movie have come up with a crazy update and they have planned to make fans happy. For the first time ever in the Indian cinema, Vikram Vedha team will screen the theatrical trailer in 10 cities a day before the official launch. It means that the trailer will screen the trailer today in selected PVR multiplexes in Mumbai, Hyderabad, Pune, Jaipur, Bengaluru, New Delhi, Kolkata, Ahmedabad, Bhubaneswar and Dubai.

Radhika Apte is playing a key role in this movie, directed by Pushkar-Gayathri. Produced by Reliance Entertainment, T-Series Films, YNOT Studios and Friday Filmworks, the biggie is confirmed to hit screens on September 30, 2022, worldwide.