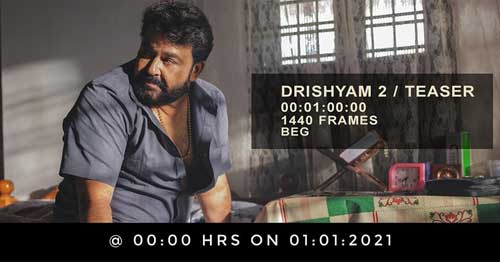 It’s well known that a sequel to Malayalam stalwart actor Mohanlal’s 2013 thriller, Drishyam, is in the pipeline. Jeethu Joseph, who had helmed Drishyam, is also directing the sequel, titled Drishyam 2.

As per the latest update, Drishyam 2’s teaser will be out on January 1st at 00:00 AM. Mohanlal reprises his George Kutty role, while Meena will again be seen as his wife. Antony Perumbavoor produces the film under his Aashirvad Cinemas banner.

Drishyam was a massive blockbuster and became the first Malayalam movie to gross over Rs 100 crore. Victory Venkatesh played Mohanlal’s role in the Telugu version, Drishyam.