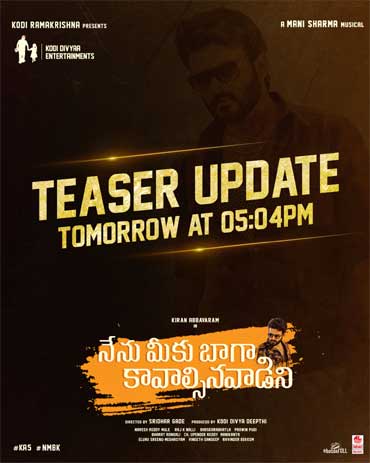 Young hero Kiran Abbavaram was recently seen in Sammathame. The romantic film received a decent response from the audience. The actor has got multiple films in the pipeline.

Now the news is that the teaser update of his upcoming film “Nenu Meeku Baaga Kavalsinavaadini” will be out at 5:04 PM tomorrow. The film is produced by the late Kodi Ramakrishna garu’s daughter Kodi Divya Deepthi. Melody Brahma Manisharma is composing the music and it is directed by Sridhar Gade. Sanjana Anand is playing the female lead in this mass entertainer. The release date is expected to come out with the teaser.