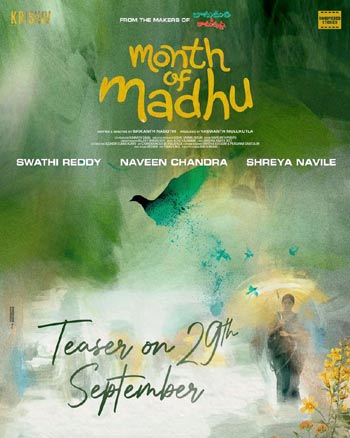 Promising actor Naveen Chandra and director Srikanth Nagothi have teamed up one more time for Month Of Madhu. Finally, the teaser of the movie is ready for release.

The makers have officially announced that the teaser of the film will be released on September 29, 2022. A brand new poster has also been released to announce the same.

Bubbly actress ‘Colours’ Swathi Reddy is playing the love interest of Naveen in this flick. Shreya Navile, Harsha Chemudu and others are also a part of the film. Produced by Yaswanth Mulukutla, the movie has Achu Rajamani’s music. The release date will be revealed soon.