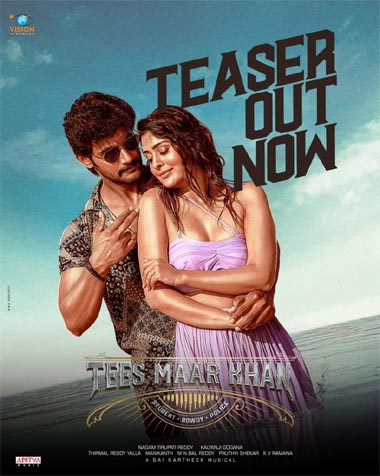 Young and promising hero Aadi Saikumar’s high-octane action-thriller Tees Maar Khan being directed by Natakam Fame Kalyanji Gogana and produced by Popular Businessman Nagam Tirupathi Reddy as Production No 3 under Vision Cinemas is all set to hit the big screens.

Meanwhile, the team is promoting the movie vigorously and the previously released promotional material got a superb response. Today, they have dropped the theatrical trailer which takes the expectations of the movie to another level.

Aadi Saikumar who played different roles in his career will appear in a role with three different shades in Tees Maar Khan. Director Kalyanji Gogana has presented the actor as a mass appealing action-oriented character.