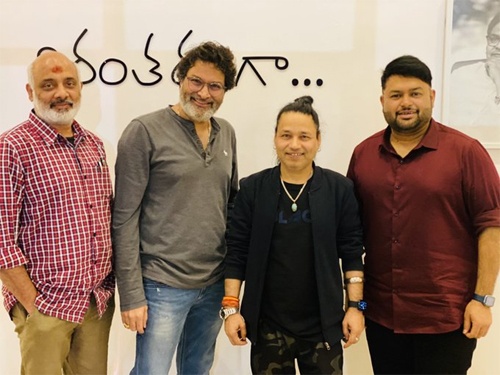 Bheemla Nayak featuring Pawan Kalyan and Rana Daggubati is the most-awaited Tollywood movie in recent times. Yesterday, the makers have announced that the title song video will be released soon.

Now, Thaman, music director of the movie, posted a pic on social media to announce the details of the next song from the action entertainer.

He has announced that the renowned playback singer, Kailash Kher, crooned a sensational song for Bheemla Nayak. Thaman also revealed that Ramajogayya Sastry has penned the lyrics for the yet-to-be-released song. Fans are on cloud 9 since this latest news is out.

Directed by Saagar K Chandra, the movie has Nithya Menen and Samyuktha Menon as the female leads. Trivikram turned screenwriter for this movie, which is bankrolled by Sithara Entertainments.