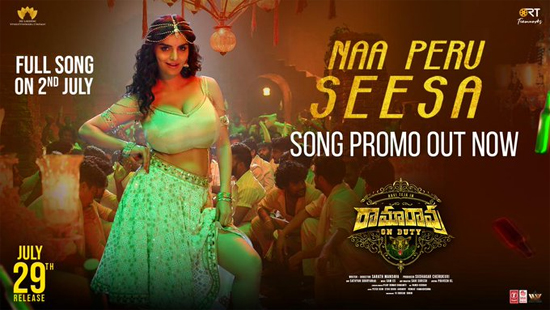 Mass Maharaja Ravi Teja is soon going to appear on the Silver screen with his latest flick Rama Rao on duty. This action drama has completed its shooting and is in the last leg of post-production.

As part of promotions, the team has released a promo from the special song today. It starts with the catchy word ‘Naa Peru Seesa’. Sam CS and Shreya Ghoshal lent vocals, while Chandrabose is the lyricist. Anveshi Jain sizzles in this special song. The full lyrical song will be released on July 2.

The film is bankrolled together by SLV Cinemas LLP and RT Teamworks. The film is directed by Sarath Mandava. Divyansha Kaushik and Rajisha Vijayan are the female leads. Sam CS composed the music. The film will hit the screens on July 29.