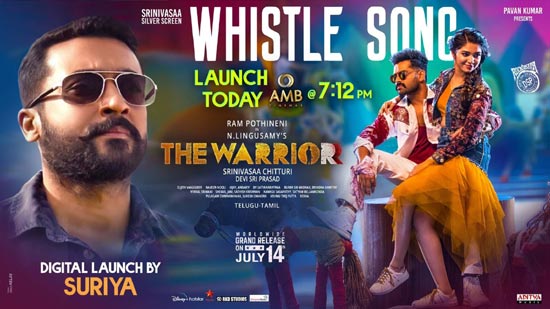 Energetic hero Ram Pothineni’s upcoming movie, The Warriorr, is up for a grand release in theaters worldwide on July 14, 2022. Directed by Lingusamy, the Telugu-Tamil movie has Krithi Shetty and Akshara Gowda as the female leads.

As announced earlier, the makers planned to release a mass song titled Whistle today. The latest news is that the Kollywood star actor Suriya will launch the song digitally at 07:12 PM today. On the other hand, the team will hold an event at AMB Cinemas in Hyderabad to release the song.

The Warriorr has Aadhi Pinisetty as the antagonist. Having Nadiya in a significant role, the action drama is produced by Srinivasaa Silver Screens. Devi Sri Prasad is the music composer for the film.