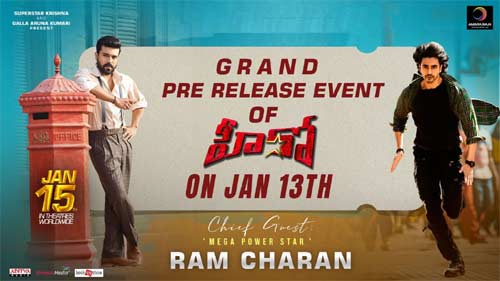 Everyone is aware that Superstar Krishna’s grandson and Mahesh Babu’s nephew, Ashok Galla’s debut film, Hero is up for a grand release on January 15th. Ahead of the release, the makers have planned to hold a grand pre-release event tomorrow.

To make the event more special, they have invited Ram Charan and with no second thought, the ‘Mega’ actor agreed to grace the event. The recently released trailer has garnered a record number of views on Youtube.

Directed by Sriram Adittya and produced by Padmavathi Galla under Amara Raja Media & Entertainment banner, Hero has the sizzling beauty, Nidhhi Agerwal, as the lady love of Ashok Galla.

Jagapathi Babu will be seen in an important role. Sameer Reddy and Richard Prasad handle cinematography, while Ghibran scored the music.