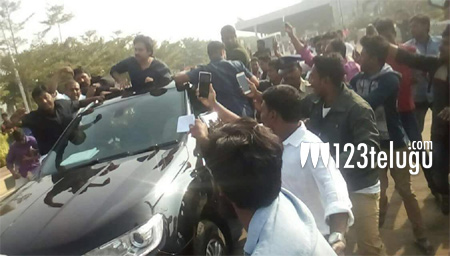 Numero uno film star and Janasena Party President Pawan Kalyan was welcomed by thousands of his elated fans as he landed at the Vizag airport this morning. Pawan began his ambitious 4-day ‘Chalo Re’ tour in Uttarandhra by interacting with the employees of the Dredging Corporation of India (DCI), who are opposing the union government’s move to privatize DCI.

Pawan will also meet the members of N Venkatesh, a former DCI employee from Vizianagaram who committed suicide in a protest to oppose the Modi government’s privatization plan. Pawan will interact with the Janasena cadres at 2 pm this afternoon and discuss about strengthening the Janasena party and playing an active role in finding solutions to people’s issues.