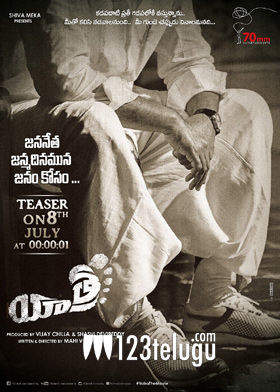 Yesterday, we reported that the much-awaited teaser for Yatra, the prestigious biopic on former Chief Minister of erstwhile Andhra Pradesh YS Rajasekhara Reddy, will be released on July 8, on the occasion of YSR’s birth anniversary. The latest update reveals that the teaser will be out at 12:00 am on the 8th of July.

Malayalam star Mammootty plays YSR in this highly-anticipated biopic. The film is slated for Sankranthi release, according to the buzz. The film’s entire shooting formalities will be wrapped up in a single schedule by September. Jagapathi Babu, Suhasini, Anasuya, Sachin Khedkar, Rao Ramesh and other prominent actors are essaying important roles in the movie.