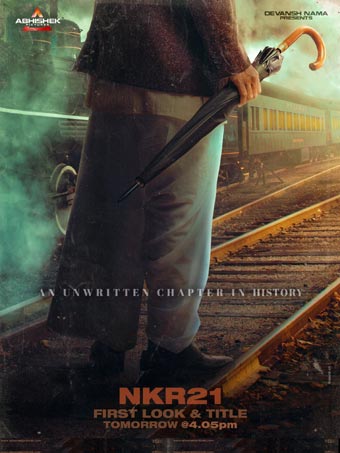 The makers at Abhishek Pictures today announced that the title and first look poster for their upcoming film starring Kalyan Ram will be out tomorrow at 4:05 PM, on the occasion of the actor’s birthday. An intriguing pre-look poster has been released to announce the same.

The pre-look poster has a period vibe all over. A man, dressed in vintage clothing, holding an umbrella and standing on a railway track, a steam train in the background together make for an intriguing poster. “An unwritten chapter in history,” the poster says, hinting that the film could be a slice of Indian history.

Abhishek Nama is producing this as-yet-untitled film. More details about the film’s director and other cast and crew members will be revealed soon.