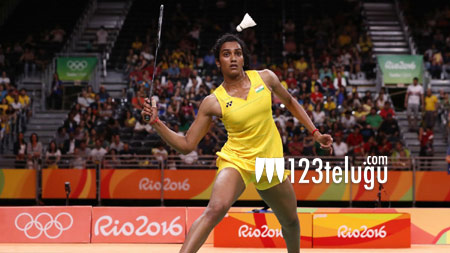 Telugu girl PV Sindhu bagged a silver medal for India at the Rio Olympics, after a hard fought final. This was her maiden attempt.

She has been getting a lot of supportive tweets from celebrities across the country, for making it to the final. But today, Tollywood celebrities took to Twitter to congratulate her for putting up a tough fight in the final.

Hats off to you #PVSindhu …. I have become a great fan of yours … Congratulations !

Bronze silver or gold doesn't matter.what matters is the true fighting spirit.And you fought like a champion.congrats @Pvsindhu1

Doesn't matter. U are the gold @Pvsindhu1.

Well played! Marin got the Gold.. But for all of us @Pvsindhu1 You Are the GOLD! #PVSindhu #Olympics

@Pvsindhu1 You are india's champion! Be proud because we are all proud of you!!! pic.twitter.com/DfqZYxEBT3

One of the best badminton finals I've witnessed!@Pvsindhu1 you have won the hearts of every Indian!.Thank you so much for wht you hav done.

Let Marin take the Gold .
We have our gold #PVSindhu ?
U made us proud .. Thank you ?#JaiHind

Well played Sindhu, well played. We love you & proud of you! Thx for the silver. Congrats Marin.

Well played #PVSindhu !! Ur a fighter! Entire country is super proud of u champion!! ? salute

PV SINDHU..
WE ARE PROUD OF YOU…
YOUR PERFORMANCE IS WORTH MORE THAN GOLD…

Ur always a Tigress @Pvsindhu1