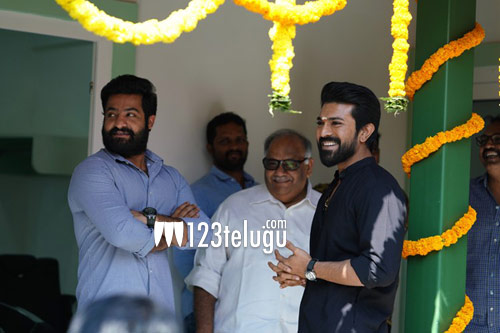 And finally, RRR, Tollywood’s biggest multi-starrer featuring NTR and Ram Charan under Rajamouli’s direction, had a grand launch this morning. Megastar Chiranjeevi was the chief guest at the event and he sounded the first clap to kick off the shooting formalities. Veteran director K Raghavendra Rao handed over the script to Rajamouli, NTR, Charan and DVV Danayya and wished them a grand success.

Although there have been numerous speculations about the film’s story and cast and crew, the makers have been tight-lipped and kept every single aspect of the movie a top secret. Now that the film has gone on the floors, we can expect a few more details very soon.

Senthil Kumar, the man behind the memorable visuals in Baahubali, Eega and Magadheera, will crank the camera for RRR. MM Keeravani will score the soundtrack and DVV Danayya will bankroll this massive project which will hit theaters in 2020. Stay tuned for more updates.