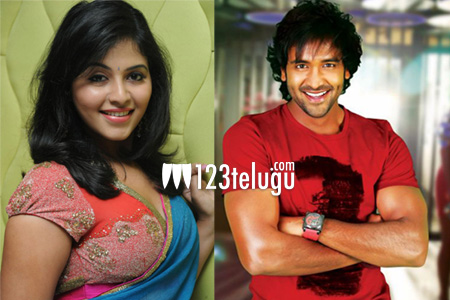 Actor Manchu Vishnu, who enthralled the audience with versatile films like Rowdy, Anukshanam and Dynamite is currently busy wrapping up his next project Sarada.

We have already reported that the team of Sarada had approached Mallu beauty Amala Paul for a pivotal role but she did not okay the project. As per the latest update, Anjali has been offered this character and reports reveal that she liked the story and will give her nod soon.

G.Karthik Reddy of Adda fame is handling the megaphone and Jadugadu fame Sonarika is the female lead in this film which is moving at a brisk pace in Hyderabad.

Anup Rubens is providing the tunes for this romantic flick which is produced by D.Kumar and Palli Kesava Rao under Sri Venkateswara Swamy films banner.