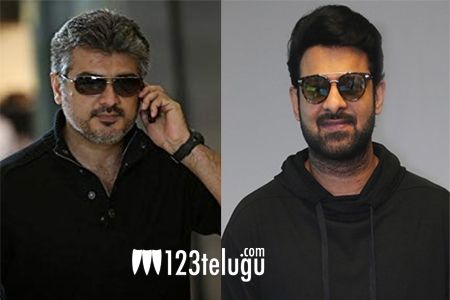 Following the historic success of the Baahubali franchise, Prabhas’ popularity grew beyond the twin Telugu states and he is now a pan-Indian star. Even several celebrities have become Prabhas’ admirers.

As per the latest reports, a memorable incident took place on Saaho’s sets recently. It’s well-known that Tamil superstar Thala Ajith is shooting Pink’s Tamil remake at RFC in Hyderabad these days. A couple of days ago, Ajith reportedly paid a surprise visit to Saaho’s team, which is shooting on the next floor.

Apparently, a visibly surprised and overwhelmed Prabhas was touched by Ajith’s gesture. Both the stars had spent nearly one hour, chitchatting and exchanging mutual pleasantries. However, Saaho’s makers have not released the photographs of this rare meeting.