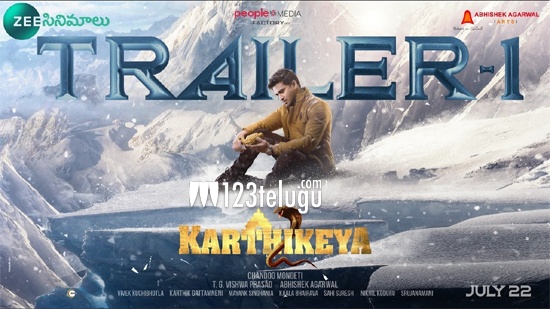 We all know that talented actor, Nikhil Siddharth has teamed up one more time with the director Chandoo Mondeti for Karthikeya 2, a sequel to the hit film, Karthikeya, released in 2014.

The makers released the trailer today and it looks grand and intense. The conflict point looks intense and Nikhil’s transformation and setup are quite good.

The visuals are arresting and the BGM is superb. Some big stars like Anupam Kher also play key roles in this film which has Anupama Parameswaran as the heroine.

People Media Factory and Abhishek Agarwal Arts have joined hands to produce this mystery movie. Having Kaala Bhairava as the music director, the movie is scheduled to release on July 22, 2022, worldwide, in Telugu, Tamil, Kannada, Malayalam, and Hindi.