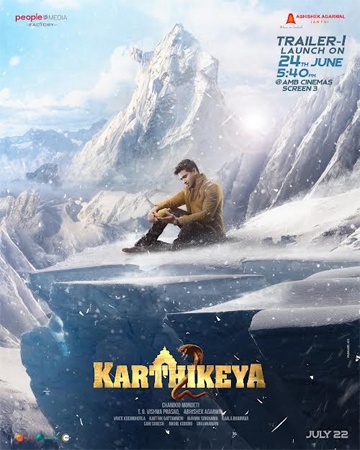 Young and talented actor Nikhil Siddharth will be seen next in Karthikeya 2. Directed by Chandoo Mondeti, the movie has the bubby actress Anupama Parameswaran as the love interest of the actor.

Today, the makers have planned to release the theatrical trailer of the film in a grand manner. They have announced that the trailer-1 will be unveiled at 05:40 PM today at AMB Cinemas in Hyderabad. A brand new poster has been released to announce the same.

The mystery thriller has Anupam Kher, Aditya Menon, Srinivasa Reddy, Harsha Chemudu and others played key roles in this movie, produced by People Media Factory and Abhishek Agarwal Arts. Having Kaala Bhairava’s music, the movie is scheduled to hit screens on July 22, 2022.