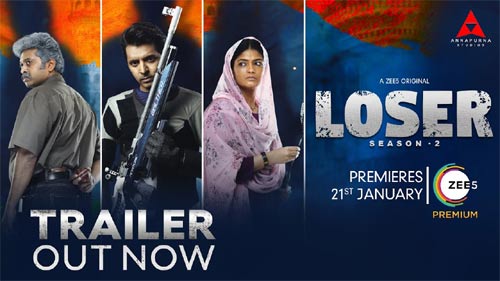 Expectations are obviously huge when there is an announcement of a sequel to a film or next season for a successful web series. The same has happened with Loser season 2, a sequel to the Telugu hit web series, Loser which premiered on ZEE5.

Loser is an anthology starring Priyadarshi, Shashank, and Kalpika in three different stories. Directed by Abhilash Reddy and Shravan Madala, the sequel’s trailer is out now.

Apart from the lead characters, the impressive trailer has introduced some new characters. Priyadarshi becomes a top shooter in the nation while Shashank trains his son in fast bowling and Kalpika gives training in badminton to kids.

Produced by Supriya Yarlagadda under Annapurna Studios in association with Spectrum Media Networks, the second season also has Annie, Dhanya Balakrishna, Harshith, Pavani Gangireddy, and others in key roles.

The well-cut trailer has created a good buzz and the audience needs to wait until January 21 to witness the emotional and intriguing sports drama series on ZEE5.