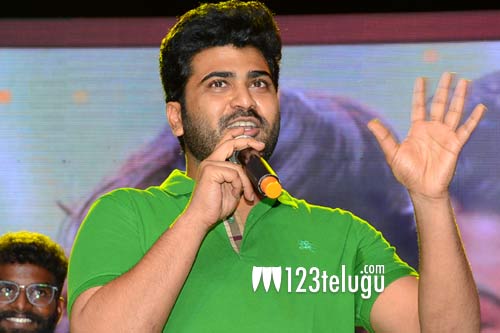 The theatrical trailer for Ranarangam, an intense gangster drama featuring Sharwanand, Kajal Aggarwal and Kalyani Priyadarshan, was unveiled at an event in Kakinada tonight. Star director Trivikram was the chief guest at the event.

Speaking on the occasion, Sharwanand revealed that Trivikram had once promised to direct him in a film. Sharwa said that a film with Trivikram will forever be a moment to cherish in his life. Sharwa also recollected his surprise meeting with Pawan Kalyan at the airport earlier today. The young hero said that there is so much to learn from Pawan’s simplicity.

Sharwa exuded confidence in Ranarangam’s success. The film is slated to release on August 15. This Sudheer Varma directorial is produced by Naga Vamsi.