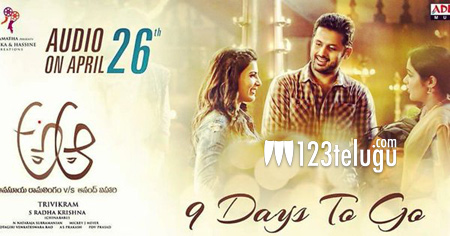 Maverick director Trivikram Srinivas is all set to rule this summer with his cool and breezy romantic entertainer, A..Aa. The film’s teaser, which was released a few days ago, got a huge appreciation from fans. Now, all eyes are set on the audio launch event of this most awaited movie.

As per the latest update, A..Aa will have its audio launched on the 26th of this month. Noted composer Mickey J Meyer, who is well known for his soulful melodies, is the film’s music director. Nithiin and Samantha will be seen romancing each other in this film.

S Radha Krishna produced A..Aa under his Haarika & Hassine Creations banner. The makers are planning to release the film in May.