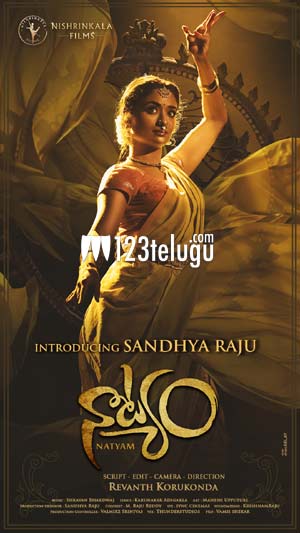 Natyam’s powerful first look showcases Sandhya Raju draped in a traditional saree as a classical dancer. With a Nataraju idol adorning her back, she appears like a Goddess of dance. Natyam marks Sandhya Raju’s silver screen debut. The makers say that Sandhya has delivered a mesmerizing performance through her acting, expressions and dance. The film showcases a unique relationship between a dance guru and his disciple and is intertwined with a love story.

Debutant Revanth Korukonda has not only written and directed the movie, but also cranked the camera and edited the film. Kamal Kamaraju and Rohit Behal play the male leads in the film. Shravan Bhardwaj has composed the music for Natyam. Nishrinkala Films has bankrolled the film, which is gearing up for release soon.