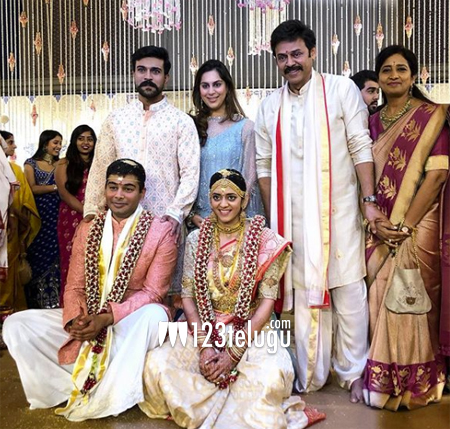 It surely was a star-studded wedding for Aashrita, daughter of star actor Venkatesh in Jaipur earlier today. But festivities began early with various ceremonies taking place through the last few days. While it was a star galore with not just actors from T-town but also from B-town making an appearance, Upasna Kamineni gave us a little sneak peek.

The entrepreneur, who is married to actor Ram Charan, took to her social media to share a photo with the bride and groom and of course Aashrita’s parents Venkatesh and mother Neeraja. Also seen in the photo is Ram Charan. In another picture, Aashrita’s cousin and Ram Charan’s best friend Rana Daggubati is also seen.

Meanwhile, pictures of Salman Khan attending the event have been doing the rounds as well.

A post shared by Upasana Kamineni Konidela (@upasanakaminenikonidela) on Mar 23, 2019 at 9:17pm PDT