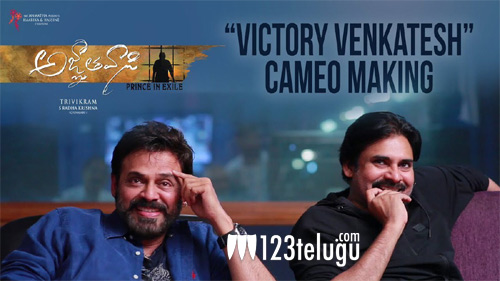 Fans of Victory Venkatesh were highly disappointed when they watched the first day first show of Power Star Pawan Kalyan’s latest release, Agnyaathavaasi, on Wednesday. And the reason was Venky’s special cameo not being featured in the movie.

But here’s something to cheer for all Venky fans. Agnyaathavaasi’s makers have announced that Venky’s cameo will be added to the film from Sankranthi. The makers released a 30 second making video in which Venky and Pawan were seen dubbing for their scene in the movie.

The camaraderie between the Gopala Gopala stars in the making video was a treat to watch, and fans would expect the same in the movie on Sankranthi.