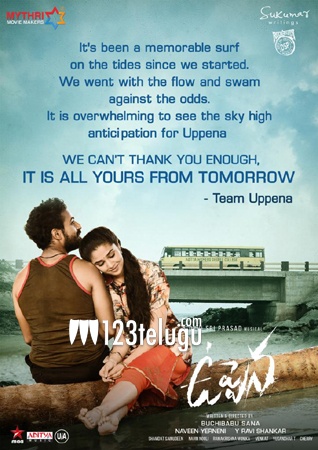 Tomorrow will be a big day for all the cast and crew members of the much-awaited romantic drama, Uppena. After almost a year since its completion, Uppena is all set for a grand worldwide release in a few hours. On the eve of the film’s release, the makers took to social media and posted an emotional note.

Team Uppena has said that it’s been a memorable surf on the tides since they started and that they went with the flow and swam against the odds. They further expressed their happiness on the sky-high anticipation for the movie. Uppena features debutants Vaishnav Tej and Krithi Shetty along with Kollywood star Vijay Sethupathi.

Buchi Babu Sana is making his directorial debut with this Mythri Movie Makers and Sukumar Writings production. DSP is the music composer.