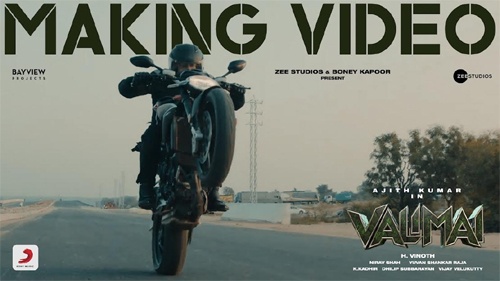 A making video of the most-anticipated Kollywood movie, Valimai, has been released today. The 3-minute-long video is nothing lesser than a power-packed trailer.

Valimai’s making video is packed with the enormous efforts of the team while making the movie. The video also showed how the Corona pandemic affected the shoot.

Besides making, the video also showed the stunts of actor Ajith Kumar and the workouts of antagonist Kartikeya.

Directed by Vinoth, the making video of Valimai made fans so happy and the expectations on the film are now increased more than ever before.