Valimai’s terrific motion poster takes the hype to the next level
Published on Jul 11, 2021 6:19 pm IST 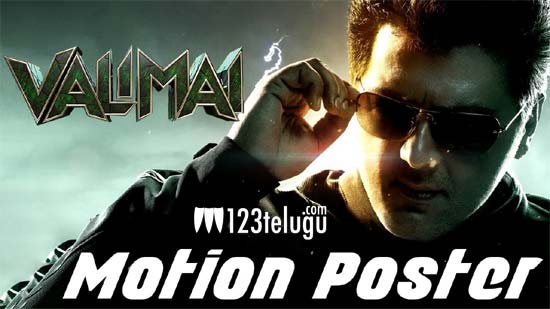 Finally, ending the months long wait, the makers of Kollywood star Ajith’s upcoming action thriller, Valimai, have just unveiled the film’s terrific motion poster. In the poster, that comes with the striking caption ‘Power is a state of mind’, Thala looked smashing and massy as ever, and fans who have been patiently waiting to catch his glimpse since 2 years couldn’t have asked for more.

Needless to say, Valimai’s stylish motion poster has taken the hype around the film to the next level, with Yuvan Shankar Raja’s cool background score being the main highlight. Already, the film has smashed the previous records set by Baahubali 2 and Avengers: Endgame in terms of BookMyShow interests. Valimai had garnered over 1.8 million interests, while Baahubali 2 and Endgame had 1.70 million and 1 million interests respectively prior to their release.

In Valimai, Ajith plays a powerful cop. Bollywood actress Huma Qureshi is the leading lady in this H Vinoth directorial. Young Tollywood hero Kartikeya plays the main antagonist in the movie. Bollywood filmmaker Boney Kapoor is bankrolling this highly-anticipated film. The film is slated to hit screens in 2021.