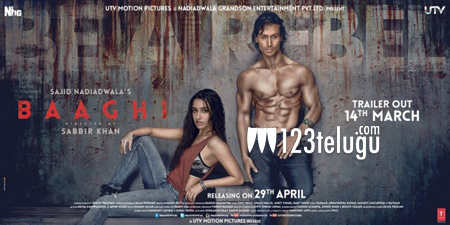 It is common knowledge that Bollywood ends up remaking hit Telugu movies in Hindi. The latest film to join the elite list is Prabhas’s cult hit Varsham. The M S Raju production is now being remade in Hindi and has been titled Baaghi.

The first look posters of the film were released today to a thumping applause all over. Tiger Shroff and Shraddha Kapoor reprise the roles of Prabhas and Trisha in this film which is produced by renowned Hindi film maker Sajid Nadiadwala.

This is the same film in which Tollywood star Sudheer Babu is playing a negative role along with Kota Srinivasa Rao. Baaghi is up for a April 29th release.