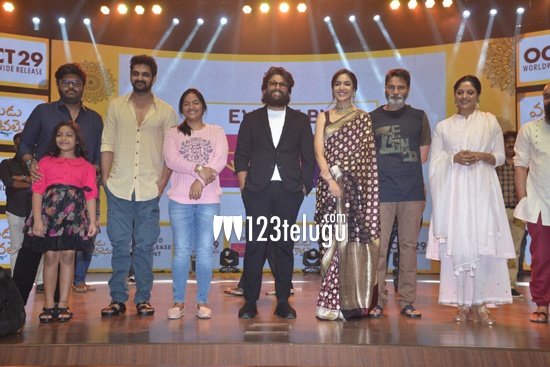 Hero Allu Arjun was the chief guest at the just concluded pre-release event of of Naga Shaurya and Ritu Varma’s soon-to-release romantic entertainer, Varudu Kavalenu. Speaking at the event, Bunny said that Varudu Kavalenu’s trailer, the yellow color in the posters, film’s core team like editor Naveen Nooli, producers Naga Vamsi and Chinnababu and music composer Thaman made him go nostalgic and brought back Ala Vaikunthapurramuloo emories.

Allu Arjun said that he admires Naga Shaurya’s innocense and the way he worked hard and made a place for himself in the industry without a filmy background. Talking about the film’s leading lady, Ritu Varma, Bunny said that he usually has a soft corner for Telugu actresses and that he has been observing Ritu Varma’s rise in Tollywood since her debut film.

Bunny further said that more and more women technicians should enter Tollywood, just like Varudu Kavalenu’s director Lakshmi Sowjanya. The Pushpa hero went on to say that he had observed how passionate both the producers Naga Vamsi and Chinnababu are about filmmaking and the kind of support they give to good content during Ala Vaikunthapurramuloo. Bunny concluded his speech by wishing all the prominent big budget movies from across the country a grand success in the coming days.