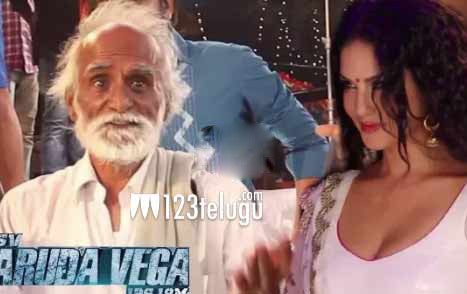 Senior hero Rajasekhar’s upcoming action thriller, PSV Garuda Vega 125.18, has been creating a lot of buzz with the stylish teaser and making videos. Today, the makers unveiled a short making video of Sunny Leone’s special song in the movie.

Apart from the Bollywood bombshell, Vedam fame Nagaiah seems to be another highlight in this dhaba song. Nagaiah is seen singing and even dancing to some peppy, mass beats in the song. The frail, old man is totally in his element in this mass number.

Guntur Talkies fame Praveen Sattaru is directing this action thriller, which is set against global terrorism backdrop. The film was shot in Georgia and Thailand, apart from India. M Koteswara Raju is the film’s producer. Pooja Kumar is the film’s leading lady. Sri Charan and Bheems are the music composers.