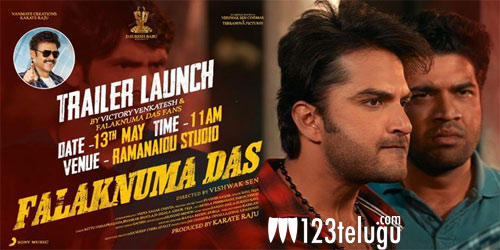 Vishwak Sen starrer Falaknuma Das is all set to hit the screens later this summer. The film is the official remake of a popular Malayalam film, Angamaly Diaries, and the Telugu version has been directed by Vishwak Sen. The actor-director’s father, Karate Raju has produced the film under Vanamaye Creations banner.

After the stupendous response that the teaser received few weeks ago, the team is all set to release the trailer. Victory Venkatesh is going to launch the trailer on May 13 in Ramanaidu Studios, and the film is being presented by Suresh Babu under Suresh Productions banner.

Vivek Sagar is the music director of this action drama. The entire film is set in Hyderabad, and it’ll reportedly showcase a never-before-seen side of the city. More details are awaited.