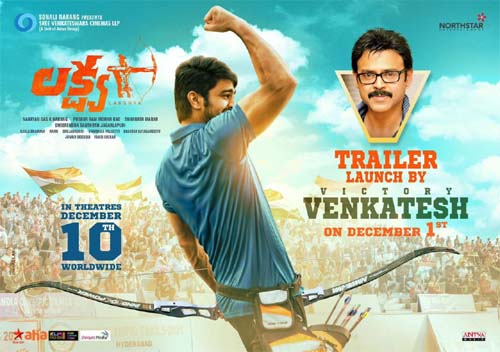 The makers of Naga Shaurya and ‘Romantic’ fame Ketika Sharma’s upcoming sports drama, Lakshya, today announced that the film’s theatrical trailer will be out on December 1st. The latest update is that star hero Venkatesh will be launching the trailer, giving a huge boost to the film ahead of its release.

Lakshya is touted as India’s first movie based on archery. Shaurya has developed a solid 8-pack body to make a striking impact in his role of an archer. The film also features Jagapathi Babu in a lead role.

Lakshya is slated to open in cinemas on December 10. Directed by Santhossh Jagarlapudi, the film is being jointly produced by Suniel Narang and Sharrath Marar.