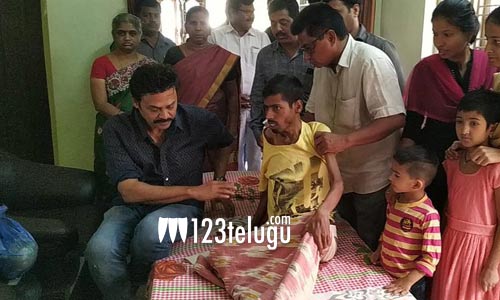 Yesterday, hero Venkatesh shared some emotional moments with his fan named Suresh. The actor, who has been shooting Venky Mama, took some time off and visited a village named Mansoorabad in Nalgonda district to meet Suresh.

30-year-old Suresh is an ardent fan of Venkatesh. He has been suffering from bone cancer for the last 6 months. He recently expressed his wish to meet his favorite star. Upon being informed of Suresh’s condition, Venky reached out to him and spent some quality time with him. Venky too had expressed his wish to see Suresh in good health soon.