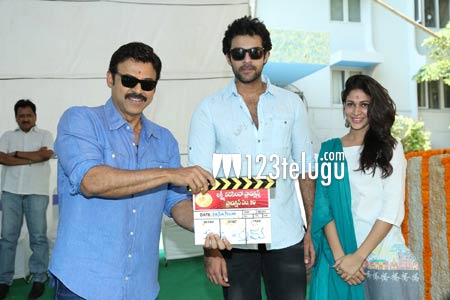 Victory Venkatesh flagged off the much awaited film in the combination of Mega Prince Varun Tej and hotshot director Sreenu Vaitla. This as yet-untitled film had its muhurtham ceremony this morning and Venky started off the proceedings by sounding the clap.

The film stars Lavanya Tripathi playing the female lead and young beauty Hebah Patel is said to be donning an important role. Tagore Madhu and Nallamalupu Bujji will be jointly producing this film, which is said to be a romantic entertainer.

Mickey J Meyer will score the music for this film. The regular shooting will commence soon.