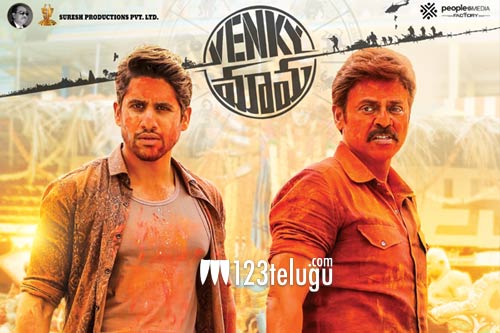 Uncle-nephew duo Venkatesh and Naga Chaitanya’s multi-starrer, Venky Mama, released on Friday and is having a solid run at the box-offices worldwide. Venky and Chay are quite happy with the way the film has been lapped up by fans and family audiences.

Post the movie’s release, both Venky and Chay interacted with a popular Telugu daily. When asked about what film of his should Chay remake in future, Venky said that Gharshana will perfectly suit his nephew. “Gharshana is a stylish cop film. Chay will best suit love stories and family entertainers. But there is a lot of style factor in him and I want to see him in a film like Gharshana,” Venky said.

Responding to his uncle’s statement, Chay said that Gharshana is his favorite film and that he also likes his uncle’s yesteryear hits such as Kalisundam Ra, Preminchukundam Ra, Pelli Chesukundam and even the recent sports drama, Guru. However, Chay went on to say that he will never remake any of his uncle’s films.