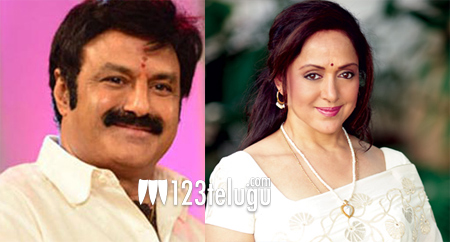 The suspense surrounding Nandamuri Balakrishna’s most eagerly awaited 100th project will be unraveled on April 8 in Amaravati when the film will be launched on the auspicious day of Ugadi. Krish will be directing this film and DSP has been roped in to score the music.

Tentatively titled Yodhudu, this film will feature the ancient Andhra history and Balayya will be seen as Gautamiputra Satakarni, the legendary Satavahana ruler. As per the latest reports, veteran Bollywood actress Hema Malini will be approached to play Balayya’s mother role, Rajamatha Gautami.

Hema Malini was last seen in a straight Telugu film in Pandava Vanavasam, way back in 1965. Keep watching this space for more interesting updates about this prestigious project.