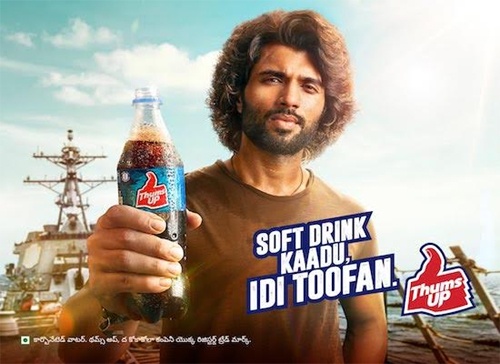 Tollywood’s young sensation, Vijay Deverakonda, has changed his name on social media profiles today. He has added ‘TOOFAN’ at the end of his name on Twitter. The actor’s sudden activity has raised confusion, curiosity and doubts among his ardent fans and audiences.

His diehard fans are in a belief that the actor has spilt the beans on his upcoming big project. Surprisingly, the young actor took to his social media handles and revealed a poster of him holding a Thums Up bottle. The energetic poster also has a catchy phrase, “Soft Drink Kaadu, Idi Toofan.”

With this, his fans came to know that the energetic actor is the new brand ambassador of the popular soft drink, Thums Up. The poster has been shared by the actors’ fans. Since then, it has been creating waves on social media and fans are happy to see their demigod as the new face of the Thums Up campaign.

In addition, Vijay Deverakonda also shared a small video glimpse of the Thums Up campaign, “Toofan Aane Waala Hai”. The stunning glimpse has revealed that the actor has something interesting in the store to disclose.