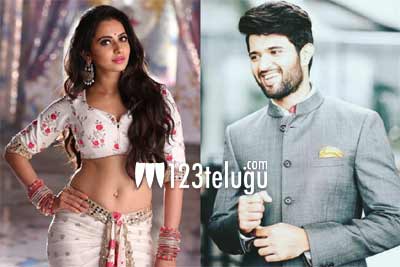 The 50th edition of International Film Festival of India, Goa is going to be a grand gala event, and the organisers are leaving no stone unturned to make it into a memorable event. Few days ago, the government of India announced that Superstar Rajinikanth will be felicitated for his contribution to cinema, and now, the event organisers have announced that Vijay Deverakonda and Rakul Preet are going to be part of a panel discussion.

The talk, named as In-Conversation Session – Trendsetters, will have Vijay and Rakul talk about their acting journey, challenges, lifestyle and a lot more in front of a packed audience. In the past, Vijay was invited to be part of a jury at the recent Mumbai Film Festival, and now, the duo has been invited to be part of IFFI, Goa as well.

Not surprisingly, both the actors are thrilled to be part of the event and they are expected to talk a lot about contemporary Telugu cinema, and how they have managed to make an impact on the audience.